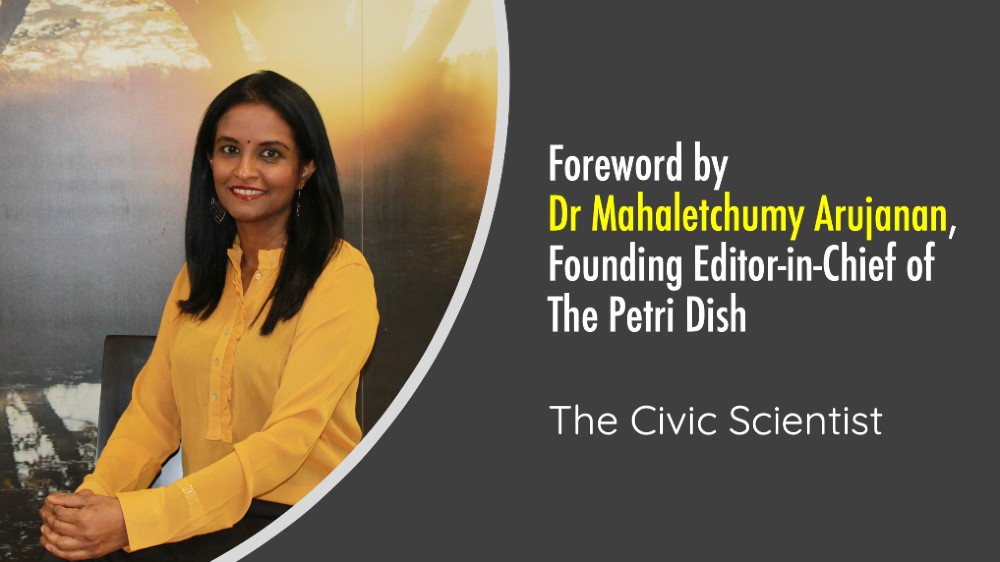 The Civic Scientist - Foreword by Dr Mahaletchumy, Editor of The Petri Dish

"A 'civic scientist' to me is a true scientist who uses his or her knowledge, accomplishments, and analytical skills to help bridge the gap between science and society."

Universiti Sains Malaysia’s effort in establishing an official blog for its researchers to narrate their research as appealing stories that are relevant to the society is indeed applaudable. Aptly named, “Simply Speaking”, it denotes simplification of science to make it palatable for the general public.

I have been a champion for science communication since 2003 and when USM announced its blog that is poised to bridge scientists and the society, I felt a great sense of joy as if part of my dream has come true. Indeed, it is my dream for Malaysian universities and research institutes to put science communication on the pedestal as one of the core activities and not on the back burner.

Science communication is a relatively new field in Malaysia and its importance is increasingly being realised by the scientific community, universities, research institutes and government agencies. This is perhaps the start of a new era in Malaysia to embrace science literacy and infect its population with science culture.

The wonderful stories of research activities, how it impacts lives and the personal experience of scientists in their pursuit to build the body of knowledge in science could be narrated as fascinating fodder for curious minds. Science has always created curiosity, so it is a myth to say science is not appetising for the general public. If repackaged and framed to suit public appetite, like National Geography, science could be the daily lingo of our society.

As a science communicator, I see USM’s Simply Speaking as a flagship initiative towards democratising science and widening its ownership so everyone feels the connection with science. Science communication is translating science, research and technology into laymen language for the consumption of non-technical audience. It is not about presenting scientific papers at conferences.

There are critical reasons to create science literacy. Nation building and creating a knowledge-based economy is only possible with a science literate society and policymakers. Policies and regulations related to science and technology should be science-based and not developed by cherry-picking information or based on bad press and emotions. The public should provide a check and balance on the country’s research priorities, fund allocation and national policies that are related to science and technology.

Public concerns on emerging technologies like genetic modification, gene-editing, nanotechnology, nuclear technology and other disciplines could only be alleviated if public engagement and discourses are held on science topics. All these are only possible if there is basic understanding of science among the public and policymakers, and scientist play a role in communicating science.

There is also a strong need for talent development in STEM to ensure the country emerges as an innovator and not merely remain as a technology borrower. Students need to be inspired to pursue STEM education and we need scientists to be in the limelight and portrayed as icons, while their research is made known to the public.

Putting science in the public domain is not just beneficial to the country or the public, but also to the scientists. Funding landscape has changed and today research is funded by philanthropists and angel funders besides government agencies.  Commercialisation without industry support is almost impossible. Research is only visible to potential donors and industry collaborators if it leaves the pages of scientific journal and reaches mainstream and social media.

Research could be halted due to policies that are based on fear and unfounded perceived risks. This will have massive impact on grants and approvals of new products and research areas. Scientists also need institutional support to expand their research projects. And in many occasions the superiors might not be from the same field to fully understand the impact of a particular research field. Putting research in the public domain addresses these issues.

Finally, studies have shown that citation of a journal paper increases when the research is covered by the media.

Some policy measures need to be in place to encourage scientists to communicate their research to lay public to address the challenges faced by them. KPIs for career advancement should also include communicating to the public and not just number of journal papers. A portion of research grants should be allocated for communicating to the public and capacity building programmes must be available to train scientists. Finally, just like how every university has a technology transfer office, a science communication office will support scientists’ to develop their messages, repackage research news into media articles, utilise social media and engage with the media effectively.

I hope Malaysia will soon have our own Carl Sagan, Neil de Grasse Tyson and Richard Dawkins. Glad that USM is leading the way.

“Science isn’t finished until it is communicated. The communication to wider audience is part of the job being a scientist, and so how you communicate is absolutely vital” – Sir Mark Walport, UK Chief Scientific Advisor